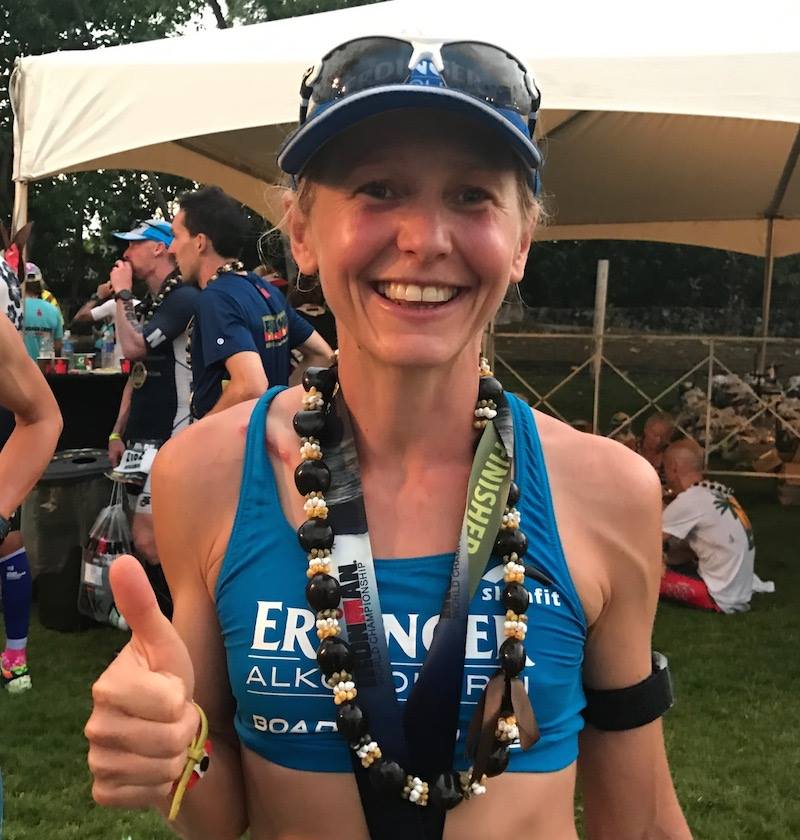 All smiles at the finish

So as you know, I broke my collarbone exactly 2 months before the Ironman world championship. At the time of the accident I was completely and utterly despondent. I was in a hole, both mentally and physically. It seemed utterly inconceivable that I’d even be able to make the start line of the biggest race of my year. One of my best friends, who is also in Kona racing as an age-grouper, is an orthopaedic surgeon. When I texted him from A+E, unable to talk because I was in floods of tears, his frank but brutally honest advice was that, without an operation there was no chance. With an operation to fix the fracture there was a chance I might just be able to do enough training to get round the race but realistically, going out to Kona to be competitive was a pipe dream.

I was fortunate to have a surgeon who was happy to take a punt on me. My fracture was pretty straightforward and the chances were it would have healed without surgery, albeit over 3-4 months. Any operation has risks, and there was no guarantee that, even with an operation, I’d be able to race in Kona. Nobody could tell me how long it would take to recover. And as he kept telling me, if I did too much too soon I’d just pull the plate out and end up in a far worse place than I would have been without the op. Luckily I also decided to take the gamble. I figured that at least if I had the op I’d know I’d done everything I could do to get to Kona. If I didn’t I’d always wonder what might have happened if I had.

The month after the crash was tough. It was impossible to follow anything like my normal training schedule and I was making it up as I went along. I couldn’t ride outside but could use the wattbike. I discovered quite early on that I could jog. So I figured, since I couldn’t run fast I may as well do a lot of slow running. So I ended up running mega miles, all very slowly. In fact, due to my injuries all year I ended up running almost as far in the last 6 weeks than I have done in the entire rest of the year, but all at snail’s pace. For better or worse, do what I can. For obvious reasons I couldn’t swim for a while, but when I got back in the water it wasn’t nearly as disastrous as I thought it would be.  I’ve never been a great swimmer and while I lost a bit it really was only a bit. I didn’t really have a training structure. I was just taking every day as it came. Trying to persuade friends to join me on the wattbike as much as I could. Jogging with anyone and everyone, as much for social entertainment as anything else.

I knew I was doing absolutely everything I could. And once I decided that I was going to give Kona a go, it became very easy to celebrate the small victories.

Getting on the plane I knew that I couldn’t have done anything extra. I’d done absolutely the best I could do in a far from ideal situation. And with that mindset it’s easy to be proud. Closer to the race I managed to find a lot of positives in the situation. All the indoor training probably made the heat much easier to deal with. The accident had certainly removed any pressure or expectation. Nobody expected anything from me and I always prefer to race as an underdog. And deep down, I was so proud of the way I’d worked to get myself onto that plane, that hand on heart, I knew as long as I executed a sensible race, I’d be proud wherever I finished. As my surgeon said ‘you’ve come a long way lifting nothing more than a cup of tea for 6 weeks’ (the standard advice for broken collarbones).

I still can’t believe I finished 9th and came away with another umeke and a place on the stage. All day, I knew I was racing to the best of my ability and making sensible decisions. But I was way down the field and looking at the big name girls ahead of me running back down Ali’I drive as I was running to the turnaround it seemed inconceivable that I’d catch them. But if I learnt anything about Kona last year it’s that patience pays off. If you’re running in the last 10km you’re probably passing people. And the top 10 is never out of reach.

If I’m even a tiny bit disappointed with anything, it’s my run. I’d hoped I’d have saved something for a stronger final hour but in the end I was empty. I paced my race well but ultimately I just hadn’t done enough long hard rides. So while I biked the same as I would when 100% fit, it took a bit more out of me than it would have otherwise and I just didn’t have anything left for that final kick for home.

But all in all I got the absolute best out of myself on the day. In fact I probably got more out of myself than was physically really possible and I definitely raced beyond my fitness. Preparation might have been 5/10 but race execution was 11/10. And to finish 9th in the world after the last 2 months was something special. I’m not sure it’s really sunk in just yet. But honestly, I think the result is to a large extent irrelevant. Getting on that start line and executing a race I’m proud of was the real achievement. Finishing in the top 10 truly and honestly is a bonus.

If you haven’t seen it here’s a video I made of the two months running into Kona.

We are so pleased you are on the mend Lucy!